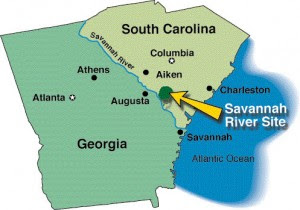 The Savannah River Site (SRS) in South Carolina remains one of the most polluted places on Earth. After decades of producing plutonium for nuclear weapons, 37 million gallons of highly radioactive liquid wastes are still being stored in aging tanks without any final disposal plan.Despite that, the Department of Energy’s semi-autonomous nuclear weapons agency, the National Nuclear Security Administration (NNSA), plans to create a new Plutonium Bomb Plant at SRS by “repurposing” the failed MOX Fuel Fabrication Facility, a bungled construction project that has already wasted over 5 billion taxpayer dollars.
This new bomb plant will be for the production of plutonium pits, the radioactive cores or “triggers” of modern nuclear weapons. NNSA plan to produce at least 30 pits per year at the Los Alamos National Laboratory (LANL) in New Mexico and at least 50 pits per year at SRS, which will be a completely new mission there. Expanded pit production is a key part of the U.S.’ $1.7 trillion “modernization” plan to completely rebuild the nuclear weapons stockpile, its supporting research and production complex, and the missiles, subs and bombers to deliver nuclear weapons. All of this is fueling a new global nuclear arms race that is more dangerous than any time since the height of the Cold War.
In order to meet legal requirements under the federal National Environmental Policy Act the NNSA is preparing a SRS plutonium pit production environmental impact statement (EIS). Trump’s 2018 Nuclear Posture Review mandated the production of at least 80 pits per year but gave no specific technical justification why that is necessary to maintain the safety and reliability of the existing nuclear weapons stockpile. Instead expanded plutonium pit production is for future new-design nuclear weapons that can’t be tested because of the existing global testing moratorium, or alternatively could prompt the U.S. to return to testing which would have serious international proliferation consequences.
NNSA intends to analyze two scenarios in its SRS plutonium pit production EIS: (1) Repurposing the MOX Facility to produce at least 50 pits per year; and (2) a No Action Alternative, which would still keep a pit production capability at LANL. This public comment period is an opportunity for concerned citizens to demand what the scope of the EIS should be (in other words, the range of issues that NNSA should consider). ‘Scoping” comments should be emailed to NEPA-SRS@srs.gov by Thursday July 25. NNSA states “Comments received after this date will be considered to the extent practicable.”
For more information, please see the federal Notice of Intent to prepare a SRS plutonium pit production EIS at https://www.govinfo.gov/content/pkg/FR-2019-06-10/pdf/2019-12003.pdf
Suggested comments are available at http://www.srswatch.org/uploads/2/7/5/8/27584045/srs_pit_production_eis_scoping_comments_july_25_2019.docx
Please customize them as you see fit.
For background information on plutonium pit production please see
https://nukewatch.org/newsite/wp-content/uploads/2019/07/PitProductionFactSheet.pdf
For more information, please send an email to Lindsay Harper at Lindsay@GeorgiaWAND.org.